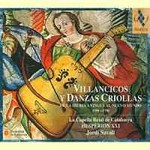 "There is no mistaking it as the product of Hespèrion XXI: the soundworld, with a wide range of instruments and featuring percussion, the distinctive voice of Figueras and the distinguished viol-playing of Savall. The mix of musical elements in these (mostly 17th-century) pieces from Latin America and the Iberian Peninsula is fascinating. Dance rhythms pervade much of this vocal music, the texts of which are rich in imagery or dynamic in their dialogue format. I particularly enjoyed the semi-improvised cachua which, though featuring viol and plucked strings, could well be imagined on panpipes, and Torrejón y Velasco's beautiful Christmas villancico in the form of a lullaby, Desvelado dueño mio, performed with finely judged expressivity: touching but unsentimentalised." Gramophone

"Gorgeously packaged and beautifully recorded, Villancicos y Danzas Criollas is a characteristic product of Savall's burgeoning, Barcelona-based indie label, Alia Vox. Alia Vox discs are marked by the sonic vision of recording director Nicolas Bartolomée, a veteran of many Savall productions over the years and one of the best producers in the business. The warm, natural recording for this disc-captured in a Catalunyan castle-is typical of Bartolomée's soundprint." Stereophile