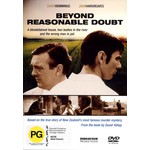 The true story of the six-year fight to free a farmer who's jailed for a double murder which he didn't commit. BEYOND REASONABLE DOUBT is the film of the most baffling and controversial case in New Zealand history. June 22 1970. The discovery of a baby in an empty bloodstained farmhouse brings police and searchers to a tiny New Zealand farming settlement, beginning a series of events which will divide a country and dominate headlines for the next ten years. The police led by Inspector Bruce Hutton (DAVID HEMMINGS) had little to go on. No bodies, few clues, no motive. For three months a massive search operation concentrated on finding the victims - a local farmer and his wife. Suspicion focused on the woman's father, Len Demler (MARTYN SANDERSON). Suddenly, with the discovery of both bodies in a nearby river, police attention switched to a local farmer Arthur Allan Thomas (JOHN HARGREAVES).

In November 1970 Thomas stood trial on a charge of double murder. He was found guilty. But there were strong misgivings among his family and friends. The concern spread through the media to the general public. Following efforts by his supporters, Thomas was granted a second trial in March 1973. This event was without precedent in British Commonwealth legal history. By now the police investigation and the legal system itself were on trial. Despite allegations of misconduct, suppression of witnesses and evidence, Thomas was again found guilty. Thomas' family and supporters would not give up. Following six more years of legal appeals and a Prime Ministerial inquiry, Arthur Allan Thomas was pardoned. One week before Christmas 1979, nine years after he was first imprisoned, Arthur Allan Thomas came home.