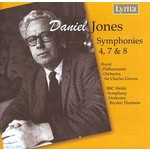 "A good introduction to a distinctive Welsh voice" (MusicWeb Sept 2007)

"Only a year ago I was lamenting on this site the lack of attention paid to composer Grace Williams. Two reasons for such neglect sprang to mind; firstly, she was female, secondly she was Welsh. One year on and matters have not really improved. Cardiff University did plan a Grace Williams Symposium, only for it to be cancelled due to bad weather - how unlikely is that in Cardiff? BBC Music Magazine included some of Williams' music on one of their cover CDs, sparking some momentary interest in one of Wales' finest composers. In the long term, however, none of this has had much of an impact upon the reputation of, and coverage of, Welsh composers. It seems that, whilst record companies are quite willing to exploit the Welsh musical heritage (Kathryn Jenkins, Voices of the Valley etc.) they seem unwilling to promote the wealth of home-grown talent that is ready to be explored. One can hardly blame them when you would be hard pushed to find a CD such as the present album in any record shop in Cardiff - dominated now by the twin giants of HMV and Virgin. Even Naxos, despite their sterling efforts to record the musical byways of the British Isles, have thus far neglected the Welsh.

In the case of Daniel Jones I think such neglect is unfair. On the strength of this record, I'm not sure that I would invest in an entire symphony cycle; his musical voice is one of grim determination, with the emphasis more on the grim. To make a crass generalisation, I could say that the symphonies on this disc are basically a set of variations on Vaughan Williams' Fourth Symphony. Anyone familiar with that piece will probably know by now if the present issue will appeal.

Jones' own Fourth Symphony makes its intentions clear in the opening bars, glowering minor triads in the low brass. The ensuing eleven minutes are absolutely gripping but, as I have suggested, quite gruelling. Things liven up for the central movement, which displays some deft touches of orchestration. Then Jones returns to grim solemnity for the final movement. Lyn Davies, in his excellent booklet notes (my own personal contender for 'booklet notes of the year') postulates that there are three distinct phases of Jones' symphonic output. The Fourth certainly falls into the first category, that relating to the late Romantic tradition. Certainly the shadow of Mahler looms large, in intent if not scope - at 31:35 this symphony is something of a dwarf compared to Mahler's symphonic output. I was perhaps most reminded of Britten's Sinfonia da Requiem in its unremitting bleakness. It is also worth noting that this symphony was composed in memory of Dylan Thomas.

The Fourth Symphony was composed in 1954; the other two works on this disc originate from two decades later. Both the Seventh and Eighth Symphonies were composed in 1972, both the results of commissions - from the Royal Philharmonic and the Swansea Festival respectively. Groves was the dedicatee of the Seventh and it is he who conducts both this work and the earlier Fourth. The Royal Philharmonic may not be the most glamorous of the London orchestras but they play here with great fire and enthusiasm. They also appear to be completely inside the idiom and the (originally EMI) recording is not far short of spectacular.

The Eighth Symphony sees a change of orchestra and conductor. Thomson, like Groves, was a great admirer of Jones and this shows in his powerful reading of the work. The (then) BBC Welsh Symphony Orchestra also play magnificently, proving that a recent spate of fantastic concerts (in their current guise as BBC NOW) was not just the result of inspired leadership from Thierry Fischer. The unnamed pianist does exceptionally well in the third movement Capriccioso.

To return finally to the booklet notes; Davies mentions Jones' 'zest for life'. I could not honestly say that I felt much of that whilst listening to this CD. But I am very glad to have made the acquaintance of Jones' symphonic output. Whatever his failings, Jones certainly does not deserve the neglect that he has suffered and his symphonies, whilst not displaying the last ounce of originality that would make them repertoire classics, should be heard more often. Those familiar with Lyrita releases will know what to expect from the presentation; I do quibble with the price though. Were it not for the relative neglect by Naxos of the Welsh, this disc could conceivably price itself out of the market. Naxos should certainly consider this repertoire; it appears that there is a niche that they have not yet conquered."
(MusicWeb Sept 2007)