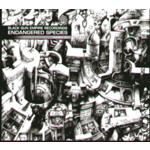 Black Sun Empire are from Holland and represent the finest in dark + techy dancefloor drum & bass. Since bursting onto the scene back in 2000, they've continued to develop their own unique style, as evident here on 'Endangered Species'.

Hitting hard across a vinyl EP series and two huge CDs (one unmixed and the second expertly blended by Black Sun Empire themselves), 'Endangered Species' is their most ambitious project yet, and it does not disappoint.

Annihilation of the Ego