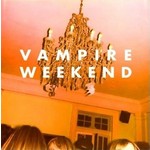 "The most exciting music to come from the planet's capital city in years."
- NME

"This is likely to be the most fun release of the year."
- Under the Radar

"Fully realized debut albums like Vampire Weekend come along once in a great while, and these songs show that this band is smart, but not too smart for their own good."
- All Music Guide (9/10)

Vampire Weekend are a band who have polarised listeners already in their short career, drawing barbs and calls of overt preppiness - but also much glowing praise and frothing superlatives.

Formed in 2005 by a group of Colombia University students with a distinct vibe in mind, Vampire Weekend began recording and performing around New York City. Drawing on their diverse interests, they began exploring the intersections of the things they all loved: African guitar music, Western classical music, hazy memories of summer in Cape Cod, winters in upper Manhattan, reggaeton and everything else among their backgrounds.

They recorded their self-titled debut album over the course of 18 months, going from playing to University friends to selling out shows in New York at the Bowery Ballroom and opening for the likes of Animal Collective.