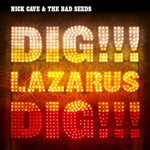 Nick Cave and The Bad Seeds hit the elevator button straight back up to the cerebral penthouse suite with their fourteenth album - the expansive 'Dig!!! Lazarus Dig!!!'

Maybe just there's a feeling something is missing. It's hard to pin down, difficult to articulate. Maybe it's a sudden desire to hear words like "myxamatoid" and "spraddle" deployed in popular music instead of the usual galaxies of moons and Junes, or a craving to listen to songs that coerce the ghosts of Marilyn Monroe, Valerie Solanas and Harry Houdini into interesting new poses. Or maybe it's just the instinctive knowledge that it's time for a new album from Nick Cave and The Bad Seeds - who else can be relied upon during days like these?

The Bad Seeds is an ongoing mission for Nick Cave and his confreres and in the last two years, this evolutionary quest has sped up to an intoxicating pace. Last seen out in public under the gleeful guise of 'Grinderman', a no-nonsense rock'n'roll excuse to "head down to the basement and shout", now Nick Cave and The Bad Seeds hit the elevator button straight back up to the cerebral penthouse suite with their fourteenth album, 'Dig!!! Lazarus Dig!!!'

"A haemorrhaging of words and ideas" is how Cave describes the follow-up to 2004's gloriously compendious 'Abattoir Blues / The Lyre of Orpheus' double. " 'Grinderman' was deliberately spare and the concepts were pretty simple," he explains. "With 'Dig!!! Lazarus Dig!!!' we allowed ourselves to get expansive."