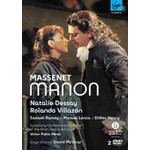 G : - "Natalie Dessay and Rolando Villazón bring to their characters the generosity of their commitment...the French soprano Natalie Dessay is poised to succeeding brilliantly her evolution towards the repertoire of lyric sopranos" www.forumopera.com

"Watching Natalie Dessay and Rolando Villazón express their passion on stage, one is impressed both by their supreme vocal skills and the masterly craft of their acting. But one never once believes that they are in love.

Dessay is too coldly serious for the flirtatious teenager and Villazón too swarthily intense for the naive romantic, and David McVicar's production overly tragic at comedy's expense. The lightness is all in Manuel Lanza's roguish Lescaut, the baton of Victor Perez conducting the Symphony Orchestra and Chorus of Gran Teatre del Liceu and the discreet choreography of Dessay's nude scene."
(TimesOnline)

"Natalie Dessay and Rolando Villazón bring to their characters the generosity of their commitment […] the French soprano Natalie Dessay is poised to succeeding brilliantly her evolution towards the repertoire of lyric sopranos...the Mexican tenor Rolando Villazón brings to life a most convincing young lover...Billed along these stars a homogeneous cast, where each character has depth...Victor Pablo Pérez reveals as of the overture special affinities with Massenet's style - he draws from the orchestra of the Liceu both fluidity and reactivity which reveal to the full the elegance of the score...Fully justified ovations hailed the conductor and the orchestra; and although Rolando Villazón and Natalie Dessay got the upper hand in the applauses, the whole line-up was hailed by the Liceu".
www.forumopera.com

For their first-ever encounter in a staged opera, Natalie Dessay as Manon and Rolando Villazón as des Grieux were the much-awaited highlight of Barcelona's Liceu season this June 2007 in David McVicar's beautiful stage production of Massenet's Manon.

The DVD, out only 6 months after the performances, captures on film this outstanding production of Massenet's most popular and enduring opera which has, since its creation in Paris in 1884, maintained an important place in the repertory.