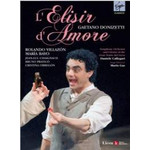 "Rolando Villazón is here on top form, fleshing out the notes with alternate delicacy and vehemence and personifying the shy, frustrated hero with a Chaplinesque range of gesture and mannerism." (BBC Music)

"[Villazon] is in glorious voice, often singing (as in 'Adina, credimi') with vocal finesse and musical imagination...He presents a slight, nimble, excitable young fellow, quite willing to use his "little-boy lost" look and to cut comic capers; equally capable of acting with dignity and restraint...Daniele Callegari conducts sympathetically"
(Gramophone)

"Rolando Villazón is here on top form, fleshing out the notes with alternate delicacy and vehemence and personifying the shy, frustrated hero with a Chaplinesque range of gesture and mannerism...María Bayo is equally accomplished, her voice dancing gracefully around Donizetti's score"
(BBC Music)

Rolando Villazón brings both comedy and pathos to the role of Nemorino, the naïve hero of Donizetti's comedy L'elisir d'amore in a 2005 production from Barcelona's Liceu

When Donizetti's comedy, updated to the mid-20th century by the Uruguayan-born director Mario Gas, was mounted at Barcelona's magnificent Liceu opera house in 2005, Opera News wrote that: "The absolute hit of the production was … Rolando Villazón, a commanding, vulnerable and hilarious Nemorino. His stage presence dominated every scene he was in …[and] his lovable innocence was a joy to behold. Villazón's perfect technique and creamy, malleable voice conquered the audience … His athletic and expressive body language - midway between Cantinflas and Mr. Bean - fits this role and this production perfectly." The Mexican tenor, making his debut at the Liceu, was called upon the encore the opera's most famous aria, the plaintive 'Una furtiva lagrima'.

Rolando Villazón can already be seen and heard as Nemorino on another Virgin Classics DVD, released in 2006. His partners in that more traditionally rustic production from Vienna were Anna Netrebko, Leo Nucci and Ildebrando d'Arcangelo; here they are Spanish soprano Maria Bayo as the wealthy and capricious Adina, Italian baritone Bruno Praticò as Dulcamara, the pedlar of the so-called elixir of love - in fact just red wine in disguise - and French baritone Jean-Luc Chaignaud as the swaggering sergeant Belcore.

ConcertoNet judged that: "This production illuminates the work and gives it meaning … Maria Bayo is a refined, subtle Adina whose voice serves the music wonderfully … Rolando Villazón is the ideal Nemorino, succeeding in presenting a young man who is somewhat clueless, but also formidably intelligent … The voice, of course, is exceptional ... Jean-Luc Chaignaud, with his splendid stage presence, is ideally suited to the character of Belcore, making his entrance through the Liceu's auditorium and saluting the audience, while his singing gives the officer a real stature with its power and authority … Bruno Praticò savours every moment as a comical and fundamentally good-natured Dulcamara … Daniele Callegari's conducting is excellent, bringing an animation and electricity that makes the whole opera even more delicious … All in all, a great evening."

Villazón also stars in another Virgin Classics DVD recorded at the Liceu, Manon in David McVicar's production of Massenet's opera, released in 2007. The titular soprano was, of course, Natalie Dessay, lynchpin of the multi-award-winning DVD of Laurent Pelly's production of La Fille du Régiment recorded at London's Royal Opera House: it was named DVD of the Year by the BBC Music Magazine, 'Choc de l'Année' by Le Monde de la Musique and awarded the equally prestigious Diapason d'Or and Opera News Award. Other major DVD releases in the Virgin Classics catalogue include the world-premiere recording of Landi's Sant'Alessio by William Christie and les Arts Florissants and Tristan und Isolde conducted by Daniel Barenboim and directed by Patrice Chéreau, the opening production of the 2007-2008 season at La Scala, Milan.

The Berlin Concert - Live From the 'Waldbuhne'