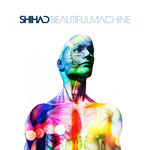 The 7th studio album from premiere NZ rock band, Shihad easily ranks along with their best! 'Beautiful Machine' features "One Will Hear the Other", "Hard to Please", "Rule the World", "Waiting Around for God" and more!

'Beautiful Machine' is the seventh studio album from New Zealand's premiere rock band - Shihad! And it easily ranks along with their best...

Months before it's release, 45,000 Big Day Out punters in Auckland were bouncing along to tracks from the album. The heart-stopping first single, "One Will Hear the Other", has put their past airplay in the shade.

"We're all quietly confident this is the most focused record since 'The General Electric'," says singer Jon Toogood, referring to the band's landmark rock radio arrival of '99. "The feeling in the band is way more positive after the last few years of touring 'cause it had been so cathartic. It was like, right, I wanna have fun with melody again. I wanna have fun with grooves. I wanna write great songs that really connect and move people."

'Beautiful Machine' is loaded with them - from the exhilarating uplift of "One Will Hear the Other" to the atmospheric harmony of "Hard to Please"; the glam rock thump of "Rule the World", to the heartbreaking tenderness of "Waiting Around for God".

Check out more about Shihad at MySpace!