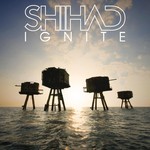 "Many bands struggle to make it to the 20 year mark but this is certainly not the case when it comes to New Zealand's premiere rock group Shihad. They have been amping up audiences and producing energized hard-rock albums for the past 22 years and show no signs of calling it a day. Where others have faltered, Shihad has dominated and their induction into the New Zealand Music Hall of Fame this year is testament to their enduring influence and undeniable success.

'Ignite' is the eighth album by the solid kiwi four piece. The singles "Sleepeater" and "Lead or Follow" show that Shihad are both the masters of brutal, heavy riffs and melodic lines."
-EMMA

New Zealand's premier rock outfit, Shihad present 'Ignite'! Self produced at Shihad's own studios in Melbourne, 'Ignite' is the 8th album in their 22 year career.

Three tracks on the album including second single "Lead or Follow" have been mixed by world class production genius Dave Sardy - best known for his work with RHCP, Jet, System of a Down, Stone Temple Pilots and Wolfmother.

Lead single "Sleepeater" topped the Rock Airplay charts at #1 in New Zealand for five weeks running and captivated all with it's stunning visual accompaniment.