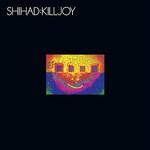 Listening to KILLJOY is like getting a big, beautiful punch in the face. It'll give you two black eyes but leave you smiling. It's that good. And now that Shihad's classic second album is turning 20, it's fitting it gets the re-mastered and reissue treatment to make it sound bigger and more imposing than ever. KILLJOY is volatile, catchy, and intense all in one.

This storm of sonic power isn't just one of New Zealand's finest rock albums - it's one of the country's best albums full stop.

If 1993 debut, CHURN, was the sound of Shihad's roots, then KILLJOY was the blueprint for the band's trademark mix of melodic heaviness, pounding rhythms, and catchy songs that get people singing and chanting along.

Released in May 1995, Killjoy peaked at No.4 on the album charts and went on to gain platinum status and win album of the year at the New Zealand Music Awards in 1996.

You Again
Gimme Gimme
The Call
Envy
Debs Night Out
Bitter
For What You Burn
Silvercup
Get Up
N.I.L (Bonus Track)