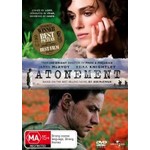 Based on the novel by Ian McEwan, 'Atonement' opens in England in 1935, on the hottest day of the year. In the looming shadow of World War II, Briony Tallis and her family live a life of wealth and privilege in their enormous Victorian Gothic mansion.

As the family gathers for the weekend, the combination of the oppressive heat and long suppressed emotions coming to the surface create an ominous sense of threat and danger.

Briony, a fledgling writer, is a girl with a vivid imagination. Through a series of catastrophic misunderstandings she accuses Robbie Turner (James McAvoy), the housekeeper's son, and lover of her sister, Cecilia (Keira Knightley) of a crime he did not commit.

This accusation destroys Robbie and Cecilia's newfound love and dramatically alters the course of all their lives.