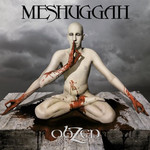 Easily one of the most scarily gifted bands in metal, Sweden's precise, devastating Meshuggah presents here in 'Obzen' another set of explorations into carefully controlled mayhem.

This nine cut masterwork continues their seemingly robotic mastery of complex, polyrhythmic thrash so expertly delivered it's unthinkable that it came from mere humans. The monochromatic austerity of this album casts Meshuggah's metallic adventures in grim, grey light, as unfeeling and chilly as a morgue drawer. It's a vision of jazz pushed to its mathematical extreme and ruthlessly robbed of its vibrant color. What's left is a steel-hard reduction of angles and equations, and oppressive epics such as "Electric Red" and the disorienting "Pravus" flay like spinning razors.

The inevitable approach of 'Obzen' cannot be stopped, and the band's groove is locked in tight enough to provide a locomotion that moves mountains. If ever music was to be accurately described as "heavy metal", Meshuggah's is it.

"Like any good thinking-man's metal band, Meshuggah have found a way to evolve and stay primal at the same time."
-ROLLING STONE

"They're still crisp and cold... It's still possible to hear a human heart beating within the steel."
-ALTERNATIVE PRESS

"[A] stunning collection of intelligent metal that perfectly combines technicality with power and hits you in the gut with every track."
-KERRANG