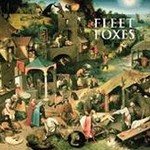 Drawing on everything from folk and west coast pop to choral and traditional Irish music, FF's self-titled full length debut is rich with pastoral harmonies, both familiar and simultaneously original.

"If a group of friends spent their lives being brought up listening to Beach Boys music, living in the wilderness with a lot of psychedelic and folk influences it might just result in an album something like Fleet Foxes' debut album… they take influence from the best bits of '60s and '70s US folk records and manage to create stunning songs that make a great impact. Fleet Foxes are a revelation, and they sound exactly like one."
- Contact Music

"The 5-piece may hail from Seattle, but they've got the soul of the backwoods South. And it's an old soul, despite their youth."
- QRO Magazine

Fleet Foxes are a five piece out of Seattle, Washington. Drawing on everything from folk and west coast pop to choral and traditional Irish music, their self-titled full length debut is rich with pastoral harmonies both familiar and simultaneously original. The joy they derive in creating each song is palpable and we feel it too!

Robin Pecknold (Vocals, Guitar) and Skyler Skjelset (Guitar) met in the 7th grade at their suburban Junior High just outside of Seattle back in 1998. Within a few short months of becoming friends the two began to play and write music together. For the next eight years the pair would write and quickly discard dozens and dozens of songs, just for fun and always in private.

It wasn't until a few years later, in 2006, when the boys began to emerge, shaking out some of the basement-born tunes live as Fleet Foxes. With new friends and cohorts from Seattle's musical community: keyboardist Casey Westcott (Seldom), drummer Nick Peterson (Headphones, Pedro the Lion) and later, bassist Christian Wargo (Crystal Skulls), the now complete Fleet Foxes used credit cards, tip money, and loans from friends and family to fund time in the studio, crafting their first demo, and subsequently the release 'Sun Giant' EP as well as this debut full-length album, 'Fleet Foxes', with family friend and Seattle producer Phil Ek manning the rudder.

As for the music, the influences are undeniable. "We grew up listening to the music of our parents," Robin notes, "The Beach Boys, Simon & Garfunkel, the Zombies, Joni Mitchell, Fairport Convention, Steeleye Span, Love, Marvin Gaye, Bach, Crosby Stills & Nash, Bob Dylan, Buffalo Springfield, and every other perennial '60s band you'd expect to find in the record collections of baby boomers."

Fleet Foxes' sound is in constant motion - an ever-evolving, growing and changing living thing, climbing higher, to reach an illusory pinnacle in the clouds that grows more elusive with each inch of elevation gained.

There is a moment on David Crosby's song "Laughing" where Crosby, Joni and the whole gang hit a harmony that might be the most gorgeous moment in the history of recorded music. Well, the Fleet Foxes know that moment all too well, and they go for it wholeheartedly on this wonderful album from the next great hope…

That's Why God Made the Radio