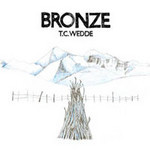 Conrad Wedde covers a lot of ground in his solo debut album 'Bronze'. You'd have to say the Phoenix Foundation multi-instrumentalist moves around, which is appropriate, maybe, seeing as it was recorded under almost as many roofs as there are tracks on it. Name a street in Newtown, Wellington, and chances are one of the songs found its shape there, while Waiheke Island, Pelorus Sounds and the Kapiti Coast also contribute.

'Bronze' is hard to describe - if you like electronic music, there's a bit of Kraftwerk-y, Jean Michel Jarre meets Boards of Canada in there. If you like guitars, well, he's a pretty damn good guitarist, too! It's tempting to say there's a bit of everything, but that would be lapsing into clich and on 'Bronze', Wedde does everything but clich.