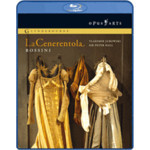 DVD Blu-Ray - "The BD disc offers an excellent reproduction of the "live" experience that will surely warm the hearts of those who cannot make it to the opera house often enough."
(Blu-Ray.com)

"Under the supervision of Sir Peter Hall and with spectacular set designs by Hildegard Bechtler La Cenerentola was recorded at the Glyndebourne Opera House, East Sussex, in June of 2005. It was also filmed with high-definition cameras allowing the viewer to truly immerse into a world of endless beauty.

… the entire production was filmed with high-definition cameras and the final product is absolutely breathtaking. Incredible degree of detail, clarity, and depth is what this transfer by Opus Arte offers. The rich decors and excellent costumes the singers wear come to life in a manner I don't think you would ever see captured on DVD. Different scenes with different lighting settings (the solo arias in particular are stunning) are revealed with an excellent degree of nuance. Everything here looks impressively fresh, from the overture where the camera spends a great deal of time studying Vladimir Jurowski's gestures, to the final scene in the opera where love and forgiveness triumph. My only, very small, concern is that during the overture I noticed a mild dose of motion judder which also reappeared later on during the second act. Still, this is not an issue to be discouraged by if you have even the slightest interest in Rossini's masterpiece. Watching opera at home has never looked this good!

Opus Arte offer two audio tracks: an Italian PCM 2.0 and PCM 5.0 mixes. And with this specific presentation of La Cenerentola you want to listen to the second track. It is incredibly crisp, vibrant, and undoubtedly recreating the "live" opera experience as best as possible. The challenging soprano part for example (La Cenerentola boasts one of the most difficult soprano parts) is astounding - the high notes are piercing. I was absolutely captivated by Ruxandra Donose. The important orchestral contribution on the other hand is just as expertly treated. The dynamic interaction between the singers and the orchestra is captured marvelously at times resembling a studio recording. To sum it all up - if you have a great audio system prepare to be immersed in sonoric bliss. Optional English, French, German, Spanish, and Italian subtitles are included.

Aside from a Cast Gallery, and an illustrated synopsis, there is an excellent interview with Sir Peter Hall and Vladimir Jurowski where the two discuss the merits of La Cenerentola, its timeless appeal, as well as the different reads it has received. In addition, Opus Arte have once again supplied an excellent booklet with a lovely essay by Professor David Osmond-Smith from University of Sussex, England titled "Goodness Triumphant: a sideways glance" where he follows the history of Rossini's masterpieces as well as analyzes its universal message(s). The essay is offered in English, French, and German Opus Arte are once again set to entice opera lovers. A beautiful rendition of Rossini's beloved La Cenerentola courtesy of Vladimir Jurowski, Sir Peter Hall, and The London Philharmonic Orchestra is what they have delivered this time around. This is a rich and impressively staged production of the highest caliber. The BD disc offers an excellent reproduction of the "live" experience that will surely warm the hearts of those who cannot make it to the opera house often enough."
(Blu-Ray.com)