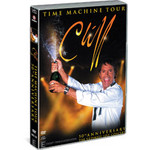 Join the celebrations for Cliff's 50th anniversary and experience his most thrilling live show ever, which was filmed at London's Wembley Arena. The Time Machine tour features all his greatest hits and highlights through a spectacular musical journey across five decades. This is a unique, must-have DVD that no Cliff fan should be without!