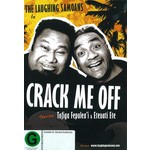 Comedy sensations, The Laughing Samoans (aka Eteuati Ete and Tofiga Fepulea'i) have come a long way since their debut gig at the Fringe Festival in Wellington in 2003.

In addition to commanding such major NZ venues as The Aotea Centre and The Michael Fowler Centre, The Laughing Samoans now fill large concert halls in the USA, Hawai'i, Australia and (obviously) throughout the Pacific region.

The Laughing Samoans: Fink About It