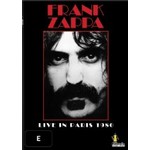 Frank Zappa is revered as one of the greatest innovators of modern music; an iconoclast who destroyed music convention with genre-busting funk / blues / psychedelic / heavy rock arrangements, and incredible live stage shows. As a solo performer, and with his groundbreaking band The Mothers of Invention, he recorded over 60 albums as well as collaborating with artists like Captain Beefheart + the London Symphony Orchestra. Rock 'n' roll's sharpest musical mind and an astute social critic, Frank was the most prolific composer of his age.

Recorded Live in Paris in 1980, this is a rare recording of our hero performing at the peak of his career with his incredible backing band, including Ike Willis (guitar + vocals); Ray White (guitar + vocals); Tommy Mars (keyboards); Arthur Barrow (bass); and David Logeman (drums). It was the year after Frank released two of his greatest albums - 'Sheik Yerbouti' + the masterpiece, 'Joe's Garage' - and this cracking live show includes many classic songs like: "Dancin' Fool"; "Bobby Brown"; and "The Illinois Enema Bandit".