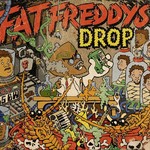 The follow-up to Freddy's hugely popular debut album is another amazing, hi-tek dub-soul boil up!

Deep. This word crops up constantly when you talk to various members of Fat Freddy's Drop, the seven-strong New Zealand collective whose unique blend of Hi Tek Soul, Jazz and Reggae has been winning an ever increasing global fan base since the release of their debut album 'Based on a True Story' in 2005. Over the last three years, they've triumphed at the biggest and hippest festivals, from Glastonbury in the UK to the Big Day Out via Sonar In Spain and Le Printemps de Bourges in France, and become the first independent band to debut at number one in New Zealand, in May 2005. Their first album, deep with soulful cuts like the insidiously infectious "Cay's Crays", the chilled-out "Ray Ray", the hypnotic "Wandering Eye" and the epic "Hope", has gone on to sell 200,000 copies, and made them firm favourites with audiences all over Europe too, taking them around the world three times.

So you would have thought that, when it came to recording 'The Big BW', the follow-up, main-man, producer and beat-master Mu, born Chris Faiumu, aka DJ Fitchie, and his band-mates would have felt the pressure to live up to the praise heaped on 'Based on a True Story' - in the UK, The Observer called their debut "a slow-burn winner" while The Guardian chipped in with "transcendental".

Not a bit of it. "There was no external pressure. There was pressure to try and come up with something that's a natural progression and an improvement as well," says Mu from The Drop, his home, studio and the group's convenient base, a few steps away from the beach in Lyall Bay, a suburb of Wellington popular with surfers. "I've spec-ed up my studio but we didn't go in with any preconceptions. It's still jazz, soul and reggae with a bit of a modern take on it. We're better songwriters, we're moving away from the big long jams that are probably more of a live thing."

This upbeat outlook also informs the group's sound and is reflected in the sunny, reggae-infused "Pull The Catch". According to Toby, "It was written a few years ago when we were travelling in the South Island, staying near Dallas' hometown Rakautara. One morning, a few of the band dragged themselves out of bed and went out before dawn on a fishing boat with Dallas' uncle. When they came back from the ocean they were singing this song. We had a studio set up in a little house at the beach and we recorded the demo that very day."

The New Orleans-flavoured "The Nod" was also inspired by the Freddy's convivial, communal lifestyle. " "The Nod" is about a very specific subject: the parties that used to be held in a certain infamous flat in central Wellington about ten years ago," says Toby. "It was a flat where various members of the band lived at various times. We would rehearse there occasionally. The humour in "The Nod" comes from that party vibe where it's all about good times and ridiculous entertainment. The Jazz break is pure ridiculous entertainment."

At the opposite end of the spectrum is the title track, "Big BW", "a personal favourite" of Toby's. "It's more of a meditative piece." Somewhere in the middle is the irresistibly soulful "Boon Digger", with a yearning, plaintive vocal from Dallas and deep lyrics worthy of the late Curtis Mayfield. "It certainly has a flavour all of its own," agrees the trumpeter. "The song compliments the others on 'The Big BW', but it's unique."

Also included on the album is "The Camel", featuring British singer Alice Russell, which was inspired by the Freddy's environment and the role the elements play in it. "It came about from Fitchie's beat and an epic 20 minute guitar solo from Jetlag Johnson. We were working on the song at the beginning of winter. The day that Alice came to work with us, there was a storm raging outside. The waves were crashing over the wall into the backyard. I arrived at the studio and found Dallas and Alice working intensely in a small room with two heaters on full blast. There wasn't much that I could add, so I sneaked away to the café. Later on, Hopepa and I added our Ethiopian horn arrangement," recalls Toby.

Now the Freddy's are ready to drop 'The Big BW' album and looking forward to touring the world again. "We've absorbed a few influences along the way - Berlin bashment, Portuguese top forty, Tooting Bhangra Beat, Montmartre TV shop Techno Hi-Life… enthuses the trumpet-player. Already sounds like the recipe for the Freddy's next album . . .

Songs From a Dictaphone