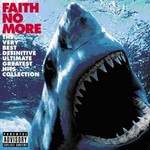 The coolest 2CD compilation - a fully re-mastered best of Faith No More on Disc 1, plus a bonus CD showing off their amazing B-sides, covers, rarities and other interesting songs!

Before their dissolution in April 1998 Faith No More were one of the most respected & admired bands of recent times. They were a platinum-selling arena act with a distinctly non mainstream agenda...

Whilst the world of rock had their heads turned, in true style Faith No More yet again surprised us all. In February of 2009, they announced that they planned to reform and headline the Download Festival along with a run of European events.

Quite possibly prompted by said reformation, we now have 'The Very Best Definitive Ultimate Greatest Hits Collection', which is a 2CD compilation with the out & out fully re-mastered best of Faith No More on Disc 1, plus a bonus CD showing off their amazing B-sides, covers, rarities and other interesting songs! The set is topped off with sleeve notes written by Kerrang! magazine's editor and #1 Faith No More fan, Paul Brannigan.

"If you're looking for one lyric that sums up the twisted, misanthropic genius of Faith No More, then it is the sardonic couplet from "Ricochet" ... hits the nail on the head perfectly. Shit-stirrers par excellence, from day one the band existed to provoke, challenge and subvert conventional notions of what a rock group could and should be."
-PAUL BRANNIGAN

Music for the Man Cave