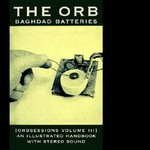 There's always been two quite contrasting sides to The Orb's centrifugal epicentre, Dr. Alex Paterson. One is the purveyor of hook-ridden songs laden with vocal toppings or memorable samples, as heard on the delightful 2008 collaboration with Youth and Tim Bran, 'The Dream', which Alex describes as "pop". The other is more serious, focusing primarily on the sound itself, noticeably rearing in the mid-90s almost as a reaction to The Orb's initial success on under-rated masterworks, like 'Orbus Terrarum'.

This is when the good Doctor sets the controls beyond any Earthly confines and gets down to stratospheric sound painting & advanced sonic science, sprinkled with an avant-garde disregard for conventional structures. These startling electronic odysseys are often hatched with long-time collaborator, Thomas Fehlmann, The Orb's Berlin connection who's been there from the first album and last made his towering presence felt on 'Okie Dokie' (2005) for the renowned Kompakt label, bastion of KOLN minimalmuzik. Such is the case with 'Baghdad Batteries' where the pair have injected some of these breathtaking outings with a subterranean house pulse beamed up from the Earth's core, resulting in a new form of space disco which sounds as old as time itself while brushed with the most future-pointed minimal techno shadows.

The title comes from a major archaeological find discovered in a village near Baghdad in 1936 dating back around 2,000 years to the Mesopotamian Parthian period and thought to be the world's first primitive battery, used for electro-plating. The album is actually the third volume in Malicious Damage's ongoing "Orbsessions" series, but whereas the previous two were compiled from nuggets trawled from the vaults, these are new tracks recorded at Thomas' Berlin studio, which also provide the soundtrack for Austrian director Werner Boote's film Plastic Planet. It rather recalls when Pink Floyd did the music for a film called 'More' in 1969, which appeared as an album in its own right to great success and is a brilliant move for The Orb.

The opening "Styrofoam Meltdown" rains in with similar sense of extra-terrestrial shock & awe, which would levitate the heart-strings when The Orb revved up their live shows with O.O.B.E. in the early '90s - a kind of heavenly carwash explosion of interstellar frequencies which here sees the inter-acting pulses joined by kick drum, even, at one point, invoking the ghost of Giorgio Moroder's "I Feel Love". "Chocolate Fingers" starts as a beatless floater drenched in shimmering keys & shining melodic strands setting off an aural firework display, stun-quotient doubled when the chord changes kick in. The title track is gorgeously haunting as marimba tones melt over swirling effects before one of the highlights - the pastoral "Raven's Reprise", a poignant tribute to the late Killing Joke bassist. This celestial electronic space symphony is followed by another... Oh b*ll*cks, they're all highlights! "Dolly Unit" is a dense, throbbing tech-flavoured pulser, sprayed with bluesy guitar peelings, giving way to an ancient rock steady beat before the muted house shuffle of "Super Soakers". The beat carries on into "Suburban Smog", deploying spaced tribal percussion and lush, organic ambience. Big Hammond chords highlight "Orban Tumbleweed" before the spoken interlude of "Pebbles". Old mucker, Max Loderbauer, from Sun Electric came in on the breezy sax and bleep vamp of "Woodlarking", while the creaking resonance of "O.O.P.A." takes the album out - actually a non-movie nugget first released on noted German electronic Skitkatapult (the initials stand for "Out of Place Artefact").

There's a very special atmosphere to this album: two men bouncing ideas and exploring in classic Orb style to make another triumphant Orb album, hitting the magic place Alex always strives for, but this time with a lustful vengeance tempered with new gentleness and a movie in their heads.

Vision of a Psychedelic Africa

From the Archives - Volume 6