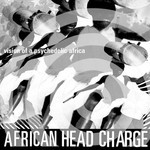 With the title being originally inspired from an interview that Adrian Sherwood read about Brian Eno, where he talked of "having a vision of a psychedelic Africa", this is the first studio album in over a decade from Bonjo I's legendary dub heroes.

Bonjo Iyabinghi Noah & Adrian Sherwood first worked together on live shows with Prince Fari + Creation Rebel in the late 1979/80 period. Bonjo I had come to England from Jamaica. He was raised in the hills in a rastafarian community and was a percussionist since childhood. He studied not only rasta drums, but also African & Afro Cuban rhythms. He loved to experiment, which was perfect for working with Adrian.

1981 saw the release of Brian Eno & David Byrne's 'My Life in the Bush of Ghosts'. Upon hearing it Adrian then read an interview with Brian where he talked of "having a vision of a psychedelic Africa". This fascinated Adrian and along with Bonjo I, plus some other musicians, started some experimental recordings in an underground (literally) studio called Berry Street in Clerkenwell, London. These recordings resulted in "My Life in a Hole in the Ground" (1981/82).

The title was poking fun at Eno's album, and themselves at the same time, as they were spending most of their lives in the studio beneath the city streets. They named the studio band African Head Charge as it seemed to fit the concept inspired by Brian.

The live shows were excellent and featured Perry Melius on drums (Tricky); bassist, Wayne Nunes; Zap on keyboards (Eddie Grant); and guitarist, Renee (Dub Syndicate / Ijahman). They were fronted by the group leader, Bonjo I.

This band alongside co-producer, Skip McDonald (Little Axe / The Sugarhill Gang / Tackhead), worked on the ensemble's final two studio albums with Adrian - 'Songs of Praise' in 1991 & 'In Pursuit of Shashamane Land' during 1993.

In 1994 Bonjo I left London and moved to Ghana where he still lives today. The dream of every Rastaman is to move back to Africa. Bonjo I fulfilled this desire and as far as African Head Charge goes the first studio album for over a decade is now out. Regarded as their finest recording ever it is called, not surprisingly, 'Vision of a Psychedelic Africa'... Enjoy. ;-)