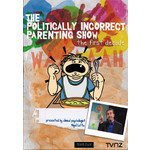 EPISODE ONE - How Did It All Get So Do-Lally?
This episode not only tells parents the real truth about raising kids, but it also explodes some of the myths about parenthood, wilfully exposes over one hundred children to the possibility of serious eye injury, and shows a preschool where, against all odds, common sense is making a brave stand against the usual gibbering nonsense.

EPISODE TWO - Eating, Poohing and Sleeping
The stuff that is the foundation of most parental mental breakdowns. This episode covers the basics of raising kids without all the hoop-lah. The fundamentals of getting your precious little one to deposit his / her wee logs in the loo rather thanin their best trousers and the strange weirdness that is "the breast pump".

EPISODE THREE - Lies We Tell Our Kids and Risky Stuff
We all lie to our children, that's a given. Most of the lies are harmless, but since the PC brigade took over, some of them have become downright damaging. To help us examine the effect of theselies, Nigel consults an authority on children - Walnut, the kids' party Clown, and we visit a school where they actively encourage risk.

EPISODE FOUR - Naughty Little Boys and Girls
Good behaviour doesn't just happen by accident; it takes a bit of work. Not a lot, but a bit. In this episode we'll see how the simple deletion of oneword from the dictionary has unwittingly encouraged a lot morenaughty boys & girls. Most importantly Nigel demonstrates his own behaviour invention; "The Ladder of Certain Doom", which is so effective that children now send him hate poetry.

EPISODE FIVE - Inside Little People's Heads
These days we all know that kids' brains are developing away like tiny little slum dwellings - with new bits sprouting out all over the place. The downside of everyone knowing this is that now we all worry that if we don't stimulate said brains constantly or effectively enough, then they'll end up stupid. But will they?

EPISODE SIX - Putting It All Together
In this episode Nigel covers some of the bigger principles that parents need to remember if they want to raise decent kids, and not go crazy in the process. And since it's the last episode, we conclude with a small piece of advice that will ensure you will never have any problems with children, ever.

View a short video clip (will open another tab/window)