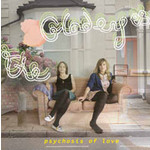 The Gladeyes
Psychosis of Love

'Psychosis of Love' is the debut album from Auckland-based duo, Jade Farley & Gwen Norcliffe. "The two demure girls with wide eyes & open hearts reconfirmed my belief in them as one of the most original, imaginative & beautiful bands in the country."

"The two demure girls with wide eyes & open hearts reconfirmed my belief in them as one of the most original, imaginative & beautiful bands in the country."
- Einstein Music Journal

The Gladeyes are Auckland-based duo, Jade Farley & Gwen Norcliffe. 'Psychosis of Love' is their debut album, released by the famed Lil' Chief Records - home to The Brunettes, The Ruby Suns & Pie Warmer.

Until now, the Gladeyes have enjoyed a strong, but cult, underground following. Having previously self-released enough EPs to cover several albums worth of material, 'Psychosis of Love' represents the best of these early songs, plus new material to keep the old fans happy.

The Gladeyes are an unusual presence in the NZ music scene. Formed in '02 at Elam School of Fine Arts, the group started as a lo-fi pop band who gained attention for their simply constructed songs coupled with sharp-tongued teen lyrics. Comparisons with the Shaggs & early Beat Happening recordings followed.

Fast-forward 7 years & the Gladeyes are still proudly D.I.Y. 'Psychosis of Love' was recorded over 2 & 1/2yrs by Gwen & Jade themselves, painstakingly put together - a genuine labour of love, revisiting ghosts from the past & offering them up wide-eyed & blinking to a new audience.