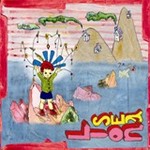 Possibly known to mainstream NZ audiences for their bus catching fire and losing all their gear on a tour of the US a couple of years ago, The Ruby Suns have been making an impact overseas for some time. After tours in the US, UK, NZ and Aus variously with The Shins, Animal Collective and Field Music, they've now signed to Sub Pop.

The Ruby Suns are 24-year-old lead singer / songwriter and Californian expat Ryan McPhun, plus NZ natives Amee Robinson and Imogen Taylor. They released their self-titled debut in '05 and followed it with the strictly limited edition Lichen Ears EP late in '07.

While the first album's musical hat was firmly tilted towards The Beach Boys, 'Sea Lion' goes walkabout with a rucksack full of ideas, revealing a joy for the natural world that'd put Attenborough to shame.

Wincing the Night Away