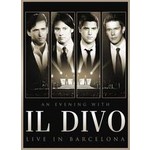 Il Divo
An Evening With Il Divo - Live in Barcelona

The DVD portion of this double-disc package also features two songs never before recorded by the band: "Bridge Over Troubled Water" & "The Impossible Dream", as well as insightful behind the scenes footage and a 'making of the tour' interview with Il Divo.