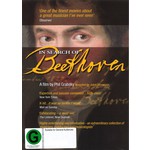 BEETHOVEN
In Search of Beethoven
A film by Phil Grabsky

As with the Mozart film In Search of Beethoven takes a comprehensive look at the composer's life through his musical output. Having created a blueprint with In Search of Mozart, Phil Grabsky documents each piece of music chronologically marrying it to Beethoven's biography and letters.

Phil Grabsky travelled across Europe and North America to interview historians and musicians between rehearsals and performances. He managed to film a remarkable 55 performances for the film - and has once again captured the raw energy of these world-class artists. It includes exclusive footage of Claudio Abbado's critically-acclaimed performance of Beethoven's opera Fidelio. There are further performances from Frans Brüggen's Orchestra of the 18th Century, the Salzburg Camerata with Sir Roger Norrington, Leipzig Gewandhaus with Riccardo Chailly, Vienna Symphony with Fabio Luisi, violinists Vadim Repin, Janine Jansen or pianists Leif Ove Andsnes, Ronald Brautigam, Jonathan Biss, Emanuel Ax, Lars Vogt and cellist Alban Gerhardt reveal their unique approach and share their passions. The Endellion String Quartet gave exclusive access to film a number of complete Beethoven quartets. Extracts appear in the film and the complete works, along with others, appear as Extras on the DVD.

Above all, In Search of Beethoven addresses the romantic myth that Beethoven was a heroic, tormented figure battling to overcome his tragic fate, struck down by deafness, who searched for his 'immortal beloved' but remained unmarried. It delves beyond the image of the tortured, cantankerous, unhinged personality, to reveal someone quite different and far more interesting.

"…starring many of the leading exponents of Beethoven's music, this expansive treatment avoids drama-doc clichés, and, through copious close-ups of fingers on strings and hands on keyboards, gives intimate insights into the art itself." BBC Music Magazine, October 2009 ****

"Cliff Eisen, Bayan Northcott, Jonathan Del Mar, Nicholas Marston and David Wyn Jones all have good things to say in this engrossing clip through Beethoven's life, times and works… The practical, obstreperous and visionary sides to the man are always kept in view, especially when they contradict each other. To say that this should be mandatory watching for music students isn't to patronise: I imagine every reader could learn something from the film at the same time as admiring how it's done." Gramophone Magazine, November 2009