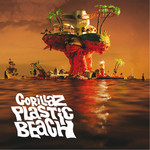 Gorillaz are back. 'Plastic Beach' represents their most ambitious & groundbreaking album to date. It features a roster of contributors so diverse it numbers not just Lou Reed; Snoop Dogg; Mark E Smith; De La Soul; Mos Def; and Bobby Womack, but also The National Orchestra of Arabic Music; and the Hypnotic Brass Ensemble, a Chicago-based nine-piece jazz / hip-hop group. Finally, this disc also sees the re-appearance of Mick Jones & Paul Simonon, playing together for the first time since their time together in The Clash.

Like the group's (fictional) leader & bassist, Murdoc, says: "You're either alive or you're not. You're either on the ride or not. The rest of it is just whimsical etchings on the cave walls inside of the human skull, just someone trying to decorate their cage, keep themselves entertained while they're here. The album's coming out. And it makes 'Demon Days' seem like a warm up act. So at least I can say we've stepped our game up..."

Journey to the West

The Spirit of Apollo
more suggestions…