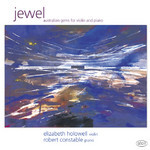 The repertoire ranges across a large period of time (1924-2009), in which musical styles, tastes and technology changed radically. But there is something undoubtedly Australian about all of this music.

For the past 20 years Elizabeth Holowell and Robert Constable have undertaken a number of projects centered upon Australian repertoire for violin and piano. Some of the repertoire has been specifically written for them, for example, The Ludlow Lullabies by Vincent Plush, and in many cases they have had the benefit of working alongside the composers of the music who have had input into their performances. Robert Constable, in the role of composer, is also represented on this CD with his hauntingly beautiful work, Jewel.