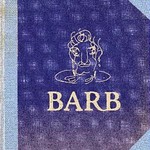 "Our very own indie super group, Barb, unites James Milne (aka Lawrence Arabia), Liam Finn, Eliza-Jane, Connan Mockasin and his Connan and the Mockasin bandmate Seamus Ebbs, drawing on each musician's extensive talents but never resting on their collective laurels. A collaboration first conceived of a world away (in London to be exact), Barb is the result of a 3 year long distance relationship which culminated in the 5 friends converging on Auckland's Roundhead Studios to create an album of rich joys, with tales of lesbian lovers, adventures on the Nile and, and even a four year old's obsession with Leonardo DiCaprio.

Liam says of the collaboration; "It seemed only natural. We have been involved in each other's music for so long... getting up to play at each other's shows... touring together when possible, we knew starting a band together would be fun... but we had no idea what it would sound like."

What it sounds like is as you might imagine - rich, interesting, vivid, at times dramatic and unexpected, and ultimately glorious."
- ERIN