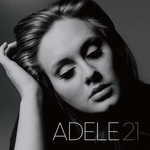 U.K. singer/songwriter Adele presents '21' - the follow-up to her 2008 breakthrough debut, '19'. The album features the singles, "Rolling in the Deep" and "Someone Like You".

U.K. singer/songwriter Adele presents '21' - the follow-up to her 2008 breakthrough debut, '19'. The album features the singles, "Rolling in the Deep" and and "Someone Like You". Written and produced by Adele and British producer Paul Epworth, "Rolling in the Deep" is described by the artist as a "dark bluesy gospel disco tune."

'21' was recorded in Malibu with Rick Rubin and London with Epworth, who has previously worked with Florence and the Machine, Plan B and Bloc Party.

"I'm very excited, nervous, eager, anxious but chuffed to announce my new album! It's taken a while and it knocked me for six when writing it. It's different from '19', it's about the same things but in a different light. I deal with things differently now. I'm more patient, more honest, more forgiving and more aware of my own flaws, habits and principles. Something that comes with age I think. So fittingly this record is called '21'. The whole reason I called my first album '19' was about cataloging what happened to me then and who I was then, like a photo album you see the progression and changes in a person throughout the years."
-ADELE

"On 21, she sounds refreshed and poised to attack... Adele emerges with a well-manicured batch of songs that, while still showcasing her interest in layered musicality, shoot straight for the pop charts..."
-Paste

"Adele is sincere, poignant and affecting throughout; the emotive 'Someone Like You' closes the album magnificently."
-Clash

"Adele has toughened her tone, trimmed the jazz frippery and sounds ready for a pub fight... When the grooves are fierce, Adele gives as good as she gets."
-Rolling Stone

"She wails harder and writes bolder, piling on the dramatic production flourishes to suggest a lover's apocalypse."
-Spin

"This album is that rarest pop commodity: timeless - Grade: A"
-Entertainment Weekly

Legend - The Best of Bob Marley and The Wailers
more suggestions…