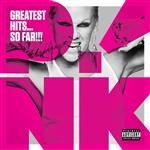 This special edition of 'Greatest Hits… So Far' includes a fantastic P!nk DVD of all her hits!

Since her debut in 2000, P!nk (Alecia Moore) has successfully paved her way on her own terms as a talented singer/songwriter/performer. Most recently, she raised the bar with her astonishing acrobatic Grammy 2010 performance of her sleeper hit "Glitter In The Air." Over the past two years, P!nk has extensively performed sold-out performances throughout Europe, Australia, NZ and the U.S., winning over critics and fans.