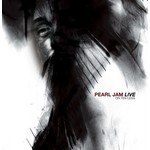 'Live on Ten Legs' was recorded over the course of the group's various world tours by John Burton. Newly remixed by their long-time engineer Brett Eliason and remastered, the material on the record spans Pearl Jam's 60 million-selling career. This release follows the band's victorious Hyde Park show in 2010, which cemented their status as one of the best live acts in the world.

Included on 'Live on Ten Legs' are versions of such classic songs as "Jeremy", "Alive" plus "Spin the Black Circle", as well as "Just Breathe" and "The Fixer" from their most recent album at the time, the acclaimed 'Backspacer'.