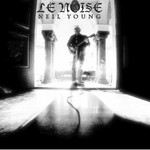 Laid down at the Daniel's home in Silverlake, he added textures to Neil's solo guitar recordings, resulting in an adventurous, distinctive record...

"We cut a couple of solo acoustic songs, but the rest is very electric," Daniel told Rolling Stone. "There's no band, but I got in there with my sonics. There's nothing else out there like it."

"The eight songs are layered in sustained distortion and electronic effects and feature heavy delays on Young's recognizable tenor."
-BILLBOARD