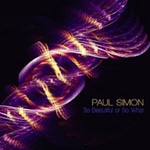 Paul Simon
So Beautiful or So What

Paul Simon presents his eagerly anticipated new album, 'So Beautiful or So What'. Produced by Phil Ramone and Paul Simon, the ten track album - his 12th solo studio record - sees Simon crafting his songs around harmony and song structure, instead of the beat-driven form of writing which has inspired him since the mid-1980s.

Recording the demos in the equipment packed cottage next to his house in Connecticut, guitarist Vincent Nguini and percussionist Steve Shehan offered up their talents, as did Grizzly Bear's drummer, Chris Bear, who contributed electronic drum parts.

Taking more than a year to perfect, Simon has revealed that 'So Beautiful or So What' reminds him of his very first solo release, his acclaimed 1972 album 'Paul Simon'.

1. Getting Ready For Christmas Day
2. The Afterlife
3. Dazzling Blue
4. Rewrite
5. Love And Hard Times
6. Love Is Eternal Sacred Light
7. Amulet
8. Questions For The Angels
9. Love And Blessings
10. So Beautiful Or So What

Play the Blues - Live From Jazz at Lincoln Center