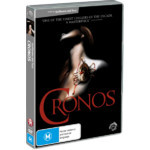 The directorial debut from Guillermo Del Toro (Hellboy, Pan's Labyrinth), Cronos combines a surreal and distinctive take on the classic vampire yarn with an allegory about US/Mexican relations.

Cronos concerns elderly antique dealer Jesus Gris who, with his eight-year-old granddaughter Aurora, discovers an ancient artifact that once belonged to a 16th century alchemist. Unbeknownst to Gris, the device-which resemble an ornate mechanical beetle-houses an immortal parasite that will grant eternal life to its host. The cost? An extreme aversion to daylight and an agonising thirst for human blood.

The film which introduced del Toro to Hollywood won the Mercedes Benz award at Cannes, and is a terrifying modern Vampire tale.