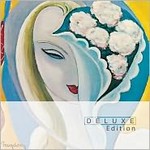 This 2CD Deluxe Edition features a second disc of gems and raities, such as "Mean Old World": the legendary acoustic duet performed by Eric Clapton and Duane Allman.

Derek and The Dominos' 'Layla and Other Assorted Love Songs' Turns 40! This 2CD Deluxe Edition features:

- Six exciting performances from what was to be Derek and The Dominos' second album, all remixed by the original session engineer, Andy Johns. The highlight of the six tracks is "Got To Get Better In a Little While" - the group's last recording - presented in this collection both as a mesmerizing jam version and as the ﬁrst-ever release of the fully produced studio version, finally completed by founding member Bobby Whitlock on keyboards and vocals.

- All four audio performances from Derek and The Dominos' sole, historic television appearance on the Johnny Cash show, November 9, 1970 - including Clapton's famous jam on "Matchbox Blues" with Cash and rockabilly legend Carl Perkins.

- The two tracks produced by Phil Spector in early summer 1970 that amounted to the first release by Derek and The Dominos: "Tell the Truth" and "Roll it Over," the a- and b-side of a single that was quickly pulled from circulation by the group.

In the world of rock there are recordings that truly resonate in historical importance and continue to cast an enduring shadow of influence. 'Layla and Other Assorted Love Songs' is one of the most steadfastly revered musical treasures of its era. Its famous title track is still hailed as an essential rock guitar anthem, a signature tune of rock's leading guitar hero, Eric Clapton.

Recorded in 1970 by Derek and the Dominos, the group was comprised of Clapton and top American musicians Bobby Whitlock, Carl Radle and Jim Gordon. Layla and Other Assorted Love Songs music offers a timeless blend of rock, electric blues and Southern gospel influences that has shaped generations of roots-oriented musicians.

Derek and the Dominos came together at a very special time and place, riding a late '60s wave of interest in roots music and blues-based rock and roll. In 1969, Clapton found inspiration playing in the loose, family-like structure of Delaney and Bonnie and Friends, an American, R&B-influenced entourage whose 1969 U.K. tour hit the British music scene with seismic proportion.

Despite the tongue-in-cheek, spontaneously chosen name, Derek and the Dominos represented a sincere effort to recreate the friendly, leaderless vibe and easy, groove-driven sound Clapton had enjoyed in '69. The foursome originally featured Delaney and Bonnie's rhythm section, keyboardist/vocalist Bobby Whitlock, bassist Carl Radle and drummer Jim Gordon, plus Clapton on vocals and guitars. They first came together in late spring of 1970, developing their sound while performing on George Harrison's breakthrough solo album, 'All Things Must Pass' (their studio jams pushed the album to a three-disc package.) That June, Derek and the Dominos premiered publicly in London. By August they began recording their debut album at Criteria Studios in Miami, with legendary producer Tom Dowd in the control room.

'Layla and Other Assorted Love Songs', the double-album that Derek and the Dominos recorded over the next 6 weeks showcased the creative singing and songwriting axis formed by Clapton and the Memphis-born Bobby Whitlock, who had grown up around the city's legendary Stax Studios. The confluence of their respective experiences, British blues-rock and Southern American R&B, generated a number of gospel-inflected tunes that featured their intertwined voices harmonizing much in the fashion of a rock-world Sam & Dave, and are among the most representative and covered tunes of that era: "Anyday," "Keep On Growing," "Tell the Truth," "I Looked Away" and "Why Does Love Got To Be So Bad."

The sessions also saw the rare coming together of Clapton and Duane Allman: two blues-rock specialists from different sides of the Atlantic. That happened when the Allman Brothers Band, then just breaking into mainstream popularity, performed in Miami on the second night of the recording sessions. The musical encounter resulted in a night full of studio jams, followed by the inclusion of Allman's guitar on most of the album, including standout duels on such blues numbers as "Key To The Highway" and "Have You Ever Loved a Woman?" and the double slide-guitar workout that defines the famous piano coda section of "Layla." Allman died only a few months later in a motorcycle accident.

Clapton's profound adoration of the American blues tradition, in all of its forms and styles, is one of the most prominent threads in the musical tapestry that is Layla and Other Love Songs. His choice of blues-based tunes to cover on the album stretches from "Nobody Knows You When You're Down and Out" (made famous by Bessie Smith in 1923) and "Key to the Highway" (associated with Big Bill Broonzy, from 1940) to Chuck Willis's plaintive R&B ballad "It's Too Late" (1956), Freddie King's "Have You Ever Loved A Woman" (1960), and Jimi Hendrix's "Little Wing" (1967).

'Layla and Other Assorted Love Songs' achieved gold-album status within months of its release in late 1970, was entered into the GrammyHall of Fame in 2000, and today remains a ubiquitous entry in various "Top 100" and "All-Time Greatest" polls, and "Must Hear" lists.