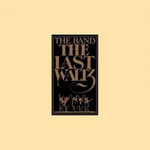 Inducted into the Rock & Roll Hall Of Fame in 1994, The Band (Rick Danko, Levon Helm, Garth Hudson, Richard Manuel, and Robbie Robertson) got their start in Canada as The Hawks, backing blues-rocker Ronnie Hawkins. In 1965 they connected with Bob Dylan and became his famed electric backing unit. In 1967 The Band embarked upon a solo course that would span ten years and 11 albums. By 1976 they were ready to call it a day after 16 years together. On The Band's last night together, they staged a historic final performance dubbed 'The Last Waltz', that celebrated their many musical milestones in the concert-hall setting at Winterland.

Augmented by a 7-piece horn section and an orchestra, The Band played all their favourite songs and welcomed guest performers - more than a dozen musical mentors and peers who had all been there along the way - Bob Dylan, Eric Clapton, Muddy Waters, Neil Young, Joni Mitchell, Ringo Starr, Van Morrison and Neil Diamond. And as icing on the cake, celebrated filmmaker Martin Scorsese documented the whole event for theatrical release. No group before or since has gone out in such opulent style.

This two-CD distillation of Rhino's four-CD boxed set presents all 30 songs from the original 1978 triple-LP release. All tracks have been re-mixed by The Band's Robbie Robertson and re-mastered for stunning clarity. A comprehensive booklet contains historic photos and detailed liner notes by Rolling Stone editor David Fricke.

Van at the Movies

It's too Late to Stop Now