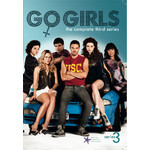 Our heroes are facing the end of their 20s - the downhill run which can only end in... (Oh God!)... 30... For some it will mean one last stab at freedom; for others, time to try and settle down. But as previous series of 'Go Girls' have shown - even best laid plans lead where you least expect them.

Kevin knows what he wants - and that's to be a dad. But Kev can't have kids alone, and he will discover that finding the right woman to share his dream will be a real challenge.

Cody, newly single, has to step up in all ways to take care of her family and take care of business. But just how far is she prepared to go to achieve this?

Britta found true love in gorgeous Brad. But this year, she is no longer content with being a fairy flake. She wants a business of her own. But Brad has decided he's wasted most of his 20s being responsible; it's time to cut loose and be free.

Bad news brings Olivia back to the Shore. While the others are worried about getting older, she's just happy to be alive. And then there's Amy, who left to do good things with the saintly Hans. But she can't stay away forever. Not when her friends so obviously need her help...

DISC ONE :-
JANUARY - Episode 1: Situation Not Normal
This year, the quests are sorted. But has Kevin really found the perfect woman? And can Cody defend Gwen against a witch?

FEBRUARY - Episode 2: It's Not About You
The honeymoon may be over for Brad and Britta, as Kevin is haunted by a ghost from his past.

MARCH - Episode 3: Playing Grown Ups
Cody deals with sex and sex bombs, and Olivia finds her own life is a battleground.

APRIL - Episode 4: Be My Baby
When Brad gets surprising news, Britta confronts the green eyed monster. And Kevin gets an offer that could ace his quest.

DISC TWO :-
MAY - Episode 5: We Are Family
Kevin has family! But this particular cat causes havoc among the pigeons. And Cody needs cash for a good cause.

JUNE - Episode 6: He's Gonna be Thirty
Kevin is facing the big 3-0, but Olivia raises bigger problems. And will Britta and Cody ever get rid of the cuckoo in the nest?

JULY - Episode 7: A Life Changing Experience
Brad is about to be a dad and Britta's new object of desire leads to desperate measures, and Leo.

AUGUST - Episode 8: Where We Are Now
Cody and Britta test their mettle when Gwen has a missing child, and Brad has a child that is all too present...

SEPTEMBER - Episode 9: 30 Days Hath September
When it comes to love, a lot can change in a month - as Kevin, Cody, Olivia, Brad and Britta all discover...

DISC THREE :-
OCTOBER - Episode 10: Homecoming Princess
Amy is back and determined to help, as Britta takes on an enemy of gargantuan proportions.

NOVEMBER - Episode 11: Choice
Does Kevin have a rival, or just a case of cold feet? And Cody's quest hits a very big hitch.

DECEMBER - Episode 12: The Beginning of the End
Kevin takes charge! But there are only so many things a man can control, especially when it comes to love...

JANUARY - Episode 13: The Brave and the Really Stupid
Kevin's wedding approaches, but his big admission has far-reaching consequences.