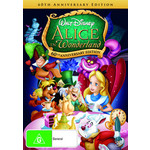 The 'Alice in Wonderland' 60th Anniversary Edition takes viewers a on magical adventure like never before with a fantastically odd and fun-filled world of colorful characters in brilliant high-definition and crystal clear sound.

Additionally, the disc comes specially-packed with never-before-seen footage hosted by Kathryn Beaumont, an all-new interactive game and more. In the film, viewers can look forward to following Alice's adventures as she chases the White Rabbit on a magical journey into the fantastical world of Wonderland.

It's a topsy-turvy place that gets "curiouser and curiouser" as Alice's madcap adventures introduce her to some truly unforgettable characters - the Mad Hatter, March Hare, Tweedledee and Tweedledum, Cheshire Cat, the Queen of Hearts and more. It's a great animated story that has pleased the eyes and ears of old and new generations alike.