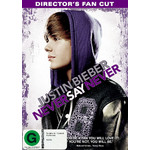 This item is currently unavailable via the quick and easy sources, but we’ll make enquiries for you. Please note - listed price is indicative only.

'Never Say Never' is the inspiring, entertaining and intimate look at the life and meteoric rise of pop phenomenon Justin Bieber.