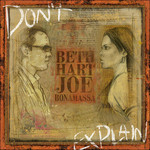 With Bonamassa on guitar and his ace band filling out the tracks, singer-songwriter Beth Hart wraps her expressive vocals around some classic soul covers.

"...sensational singer Beth Hart and gifted guitarist Joe Bonamassa world's collide to pay homage to some of the greatest artists and most beautiful music ever made... simply breathtaking!"
- John Stracey (Blues Connections)

Los Angeles based singer-songwriter Beth Hart, known for her raw and powerful blues-rock sound, wraps her expressive vocals around classic soul cover album 'Don't Explain' - an album that grew out of her friendship with blues-rock guitarist Joe Bonamassa. Produced by Kevin Shirley (Joe Bonamassa, Led Zeppelin, Black Crowes), the album features Hart's interpretations of ten soulful blues songs, with Bonamassa on guitar and his ace band filling out the tracks.

Bonamassa and Hart had crossed paths on the road numerous times, and played many of the same festivals in Europe. In early 2010, he caught a show of hers in London - "It was killer," says Bonamassa - and suggested they do a project together sometime. Beth collaborated with Bonamassa and Shirley on choosing songs, and the final set list features numbers made famous by artists including Billie Holiday (the title track, "Don't Explain"), Aretha Franklin ("Ain't No Way"), Bill Withers ("For My Friend"), Ray Charles ("Sinner's Prayer"), Delaney & Bonnie ("Well, Well," featuring a vocal duet with Bonamassa), Tom Waits ("Chocolate Jesus"), Etta James ("I'd Rather Go Blind" and "Something's Got A Hold On Me") - a personal favorite of Hart's - and others.