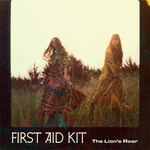 The second album from Swedish sisters, Klara and Johanna Söderberg, juxtaposes sadness and beauty in the best traditions of folk and country music.

"Bittersweet" is the word the Söderberg sisters prefer. "We like bittersweet songs, songs that affect you differently depending on how you interpret them," says Klara, the younger of the Swedish siblings that make up First Aid Kit. "Making the melodies and lyrics head in different directions is very deliberate," adds big sister Johanna, "A song like 'Emmylou' sounds cheerful, but the lyrics are the saddest thing you ever heard."

First Aid Kit's first American-recorded album, The Lion's Roar, juxtaposes sadness and beauty in the best traditions of folk and country music. They even cite the Louvin Brothers cheerfully brutal version of the old murder ballad 'Knoxville Girl' as the perfect example of the sweet and sour they adore. And this carefully constructed collection deftly succeeds in setting references to their home town of Stockholm and long dark Scandinavian winters against an unforced backdrop of country-rock swing.

The Lion's Roar, recorded in Omaha by Mike Mogis (Bright Eyes, millions more), is a full band record. The girls' father Benkt takes the bass, Mattias Bergqvist drums, while Mogis and Nate Walcott of Bright Eyes and a cast of Omaha-based musicians round out the sound. From the dynamic title track onwards, it's more honky-tonk than campfire, and no less affecting for that.

'Emmylou' name-checks such greats as Gram Parsons, Johnny Cash, June Carter and of course Miss Harris, yet for all its upbeat appeal, it recognises the sadness in the lives and art of these heroes. "We've listened to those people for a very long time. We hadn't even toured America when we started writing that song," confesses Johanna. "We actually finished it in Australia," adds Klara. The gorgeous 'In The Hearts Of Men' adds a mellotron alongside more expected textures. It sounds timeless and rather brilliant.

First Aid Kit have gone from faraway teenage fans covering Fleet Foxes for fun to recording a cover of Buffy Sainte-Marie's 'Universal Soldier' with Jack White at his request and in his Nashville, TN Third Man studio. "I think of it now as like a dream, too good to be true," says Johanna of the session, happily and hurriedly squeezed into last autumn's tour schedule. Upcoming is a US tour with fellow Swede Lykke Li- "We have something in common," winks Klara.

The exquisite 'Dance to Another Tune' perfectly blends Swedish sorrow and American feel while 'Wolf' is appropriately forest-bound, the folkiest and most European-sounding moment on the record. 'To A Poet' closes side one, so to speak and its elegant run-out, featuring a string quartet arranged by Walcott, particularly impressed the Söderbergs. "We recorded our last record at home. We couldn't even have fitted them all in," says Klara.

Despite its lonesome sound 'New Year's Eve', all distant reverb and atmospherics is "actually very hopeful". Finally the exuberant mariachi hoedown of 'King of the World' features The Felice Brothers, just passing through town during the session, and local hero Conor Oberst, who takes the last verse.

"We'd never worked with a producer before," says Johanna, "Yet we never argued with Mike about anything." The resulting record is serious fun, yet First Aid Kit are only starting. "We want to work in music forever. Our voices and songs could work in many genres," says Johanna, "We don't know how we'll sound in ten years time." But which do they prefer singing? Sad or happy songs? They roar with laughter. "We only sing sad songs." There will never be a shortage of those and in FAK hands, they will always sound nothing short of glorious.

The Living and the Dead

March of the Zapotec