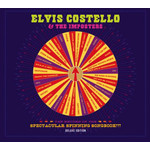 Elvis Costello & the Imposters
The Return of the Spectacular Spinning Songbook!!! - Deluxe Edition

Includes a CD, DVD and 28-page booklet filled with musings from Napoleon Dynamite (aka Elvis Costello), the MC of The Spectacular Spinning Songbook show.

Elvis Costello returned to the stage in 2011 with his celebrated 'Spinning Wheel' tour and now comes the definitive document of this tour.

Recorded over a 2-night stand at The Wiltern Theater in Los Angeles on May 11 and 12, 2011, the CD was lovingly whittled down from both nights' performances. The Los Angeles Times said the shows were "the kind of uniquely invigorating experience that warrants a buzzword all its own: inspiring."

The set includes popular songs such as "Everyday I Write The Book", "God Give Me Strength", "Watching The Detectives", "(What's So Funny `bout) Peace, Love and Understanding" plus a cover of the Rolling Stones' "Out Of Time"; an extended "I Want You"; and the return of the Bangles on "Tear Off Your Own Head".

The DVD contains bonus footage including an alternate intro by Napoleon Dynamite (aka Elvis Costello), and behind-the-scenes moments captured with the Imposters - Steve Nieve, Davey Faragher and Pete Thomas - as well as extra performances not included in the main set of the show.