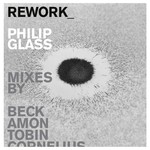 Philip Glass, one of America's most esteemed composers, is the subject of REWORK_Philip Glass Remixed, a two-disc album of remixed Philip Glass works.

The remix project joins in the celebration of Glass' 75th birthday season, which features performances and events across the globe encompassing every facet of the composer's decades-long career as a preeminent American composer - including opera, chamber music, orchestra music, dance and theatre events.

"I'm interested in what happens to music when other people use it. Whereas there are composers who don't like anyone to touch their music, I think people should because they do things I can't think of." - Philip Glass