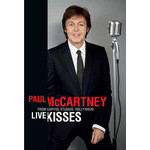 Live Kisses is the document of one magical night in LA, February 9, 2012, when Paul McCartney decided to bring his newly released collection of lovingly rendered standards and two originals to life at the very same Capitol Studios where much of the album was created.

In exclusive interview segments with Paul and Kisses on the Bottom collaborators Diana Krall and Tommy LiPuma, Eric Clapton and Stevie Wonder, among others, Live Kisses offers new insight into the conception and creation of the Kisses album, the McCartney family gatherings that introduced a young Paul to much of the material.

And then there are the performances themselves. From the sublime renditions of Home, More I Cannot Wish You, We Three (My Echo, My Shadow, And Me), Always, Bye Bye Blackbird to Paul's rendition of new original My Valentine emotionally re-animating the true to life events that inspired the lyric with stunning acoustic guitar punctuation courtesy of Joe Walsh, plus Paul's harmonising with his longtime live drummer Abe Laboriel Jr on I'm Gonna Sit Right Down and Write Myself a Letter.