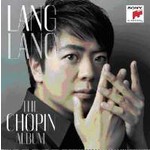 The music of Chopin has accompanied Lang Lang throughout his career, and now, in his 30th-birthday year, Lang Lang records his first album entirely devoted to his music.

The Chopin Album - Lang Lang's third album for Sony Classical - includes a selection of Chopin's best loved and most recognisable piano muisc, including the ever-popular "Minute" Waltz, and the Études, which Lang Lang made his renowned Beijing Concert Hall recital with at the tender age of 14.

Included with the Deluxe Limited Edition CD is a bonus DVD in which Lang Lang explains how Chopin has been a close companion. The video contains archive footage of Lang Lang playing Chopin, with excerpts from his early concerts and competitions. It also includes complete performances of the Grande Valse brillante (recorded live in Vienna), the "Heroic" Polonaise (recorded at Berlin's Berghain Club), and the "Black Keys" Étude in G-flat major (recorded at London's Roundhouse during the 2011 iTunes Festival).

"For the most part the playing is warm and communicative, beautifully shaped, luminously projected and boldly coloured - probably too bold and luminous for those who prefer more aristocratic refinement and reserve in their Chopin but without the exaggerated, showy style so many have found off-putting." BBC Music Magazine, February 2013 ****

"[Op. 25] No. 1 establishes the pianist's beautifully modulated sonority along with the kind of affettuoso gestures his critics love to hate...It's ironic how Lang Lang's most interesting playing occurs when he attempts to 'interpret' the least. Sony's resplendent, seductively resonant engineering deserves the highest praise." Gramophone Magazine, November 2012

"This album reflects his lifelong love for Chopin, and shows how fresh and individual his take can be...he delivers an exhilarating blend of poetry and power. The accompanying DVD is surprisingly amateurish, but reminds us of the god-given talent he was born with." The Independent, 28th October 2012

"his Grande Valse Brilliante is brilliant indeed; so are the cascading double sixths in the eighth étude in D-flat major...Lang Lang's grin and enthusiasm are genuine: he simply loves playing his piano, communicating the joy of music. Bang Bang and glitter aside, that's not something anyone should knock" The Times, 26th October 2012 ***

Whistle Down The Wind