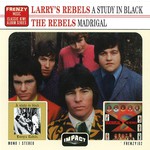 In 1967 Larry's Rebels released their first album A Study in Black, which included the Top Ten single 'Painter Man' (which was subsequently banned by NZBC radio stations for being a ribald record in bad taste). The tracks for this album were mostly stage favourites, but included five originals - among them 'Let's Think of Something' which went on the win that year's Silver Scroll.

"During 1966 and 1967 Larry's Rebels could not put a foot wrong in New Zealand. After their run of classy support roles on international tours, they began headlining their own blockbusters, including two Impact Shows and two Larry's Rebels Dance Spectaculars. At Auckland's Western Springs Stadium they drew a crowd of 18,000, followed shortly after by a crowd of 12,000 in the city's Epson Showground. Many appearances erupted into frantic riots, with the stage rushed and costumes ripped to shreds. A task force was subsequently assembled to provide protection for the band members at shows. A sure sign that the boys were serious stars." - www.sergent.com.au

The band was unravelling, however, and in 1968 Larry Morris left, and the remaining members reverted to calling themselves The Rebels with Glyn Mason taking over on vocals. They then had a number one hit with 'My Son John' and released the album 'Madrigal'. They broke up in 1970.

How Is The Air Up There? 80 Mod, Soul, RnB & Freakbeat Nuggets From Down Under