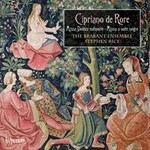 The Brabant Ensemble continue their investigation into unknown jewels of the Low Countries Renaissance, researched by their director Stephen Rice and recorded with equal amounts of passion and erudition by the young singers of the group.

Cipriano de Rore was and is principally known as a madrigal composer, and, as Stephen Rice writes, 'blended the contrapuntal complexity of Low Countries polyphonic style with Italian poetic texts to create a newly expressive vernacular genre'. This recording represents something of a new departure in presenting some of the least well-known aspects of the output of a composer who is justly famous in other fields.

The album contains two Mass settings based on French chansons, Missa a note negre on a composition by Rore himself, and Missa Doulce mémoire, which takes one of the sixteenth century's greatest hits, by Pierre Regnault dit Sandrin (c1490-after 1560) as its inspiration. Also included are three motets. Fratres: Scitote is apparently a unique instance of composition to its text: St Paul here tells the story of the Last Supper, in which Jesus takes bread, blesses and distributes it, and thereby institutes the ritual of Holy Communion.

"it's the three motets between the masses...that make the bigger impression, and show off both the Brabant's care with the weighting of every word and the perfect balance they achieve between the voice parts." The Guardian, 25th July 2013 ****

"de Rore's is music of great self-confidence, conviction and beauty...Their singing is remarkably sensitive to the crystalline substance of the music of this era...They are inhabiting it and performing something vibrant and robust. The Brabant Ensemble is also a true ensemble: the singers blend very well in all ways." MusicWeb International, 9th September 2013

"the two-voices-per-part appraoch of The Brabant Ensemble is an excellent solution and, as usual, deliver ravishing results. The singing is lithe, pure, beautifully focused and, under Rice's expert direction, perfectly responsive to every musical inflection...Another recording to treasure from the members of the Brabant Ensemble. Long may they continue." International Record Review, September 2013

"[de Rore's] contrapuntal writing, though considerably intricate at times, has a lucidity that the Brabant Ensemble's light sound emphasies...The lightness just mentioned is now something of a trademark of this ensemble...The drawback is that the grain of the individual voices is ironed out" Gramophone Magazine, September 2013

"The Brabant Ensemble is very experienced in this type of repertory, and achieves some magical effects in the Doulce memoire Mass...Of the motets O altitudino divitiarum is a truly outstanding and moving work." BBC Music Magazine, November 2013 ****

Libera Nos - The Cry of the Oppressed

Blow: An Ode on the Death of Mr Henry Purcell & other works
more suggestions…